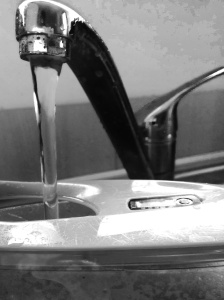 Ireland is the only country in the EU that has mandatory water fluoridation.[/caption]Fluoridated water is fast becoming a big topic here in Ireland and so it should. 73% of the Irish water supply has fluoride added to it, the highest in the EU, while our Neighbours in the UK have a mere 10% in comparison. Fluoride has been added to the Irish water supply since 1964 following a Government Bill in 1960. Only 1% of water usage is for drinking, the remaining 99% enters our rivers and eco systems. A report in 2002 Forum on Fluoridation Ireland 2002, on page 192 included Fluoride (H2SiF6) with Arsenic, Nickel, Chromium, Lead, Mercury and Silicon as elements that are currently added to the Water supply in The Republic of Ireland. The ‘Dangerous Substances Directive 2006/11/EC’ lists ‘Fluoride’ on List 11 of its polluting substances which must be reduced.The agent, Hydro Fluoro Silicic Acid (H2SiF6), in water fluoridation Hydrofluoric acid) is a listed poison under Irish Poisons Act 1982, First Schedule, Part 11 (SI 188).

The 1960 Fluoridation of water supplies Act was challenged in the High Court in 1964 by the late Gladys Ryan (Ryan v Public Attorney) claiming that certain provisions of the Act were void on the grounds that they were violating her rights and the rights of her children. Gladys Ryan was a Mother to five children from Drumcondra in Dublin and at a time in Ireland when the State (and Church) was all-powerful she took them on. http://news-beacon-ireland.info/?p=11374 The case was concluded that Fluoridation at a concentrate of 1 part per million (ppm) would not be of danger to anyone in our temperate climate. She appealed to the Supreme Court but the High Court decision was upheld.

Fifty years later the State is being challenged over this again. The Girl Against Fluoride campaign http://www.thegirlagainstfluoride.com led by Aishling Fitzgibbon is taking the Irish Government to Court to stop Fluoride and other dangerous chemicals being added to the water. At a time in Ireland when the introduction of mandatory water charges is just around the corner it can only focus the national psyche on what we are actually paying for. A Bill to stop the Fluoridation of Irish water was introduced last year by Sinn Fein’s Brian Stanley but was defeated in the Dail on its second reading.

So, what is all the fuss about? Surely Fluoride is good for teeth and is an important factor in the prevention of tooth decay? With the advance of modern fluoride toothpaste we can easily get enough fluoride for our teeth topically rather than ingesting. Many reports I found suggest that Fluoride accumulates over time in the skeletal frame and teeth and is reported that it can lead to dental and skeletal Fluorosis. In fact, if you do a bit of digging, the internet is awash with reports, (some scientific, some anecdotal) outlining the huge range of adverse effects that an excessive amount of fluoride ingestion over a long period can have on our bodies. Thyroid disorders, depression, irritable bowel syndrome, skeletal and dental fluorosis and kidney disorders are some of the documented effects.
Possibly, the big issue in all of this for some dissenters is the notion of a Government medicating their population without their express consent. There are many Government reports on this topic all of which come to the same conclusion; water fluoridation is a good thing for the population as a whole and the amounts added to the water supply can only provide benefits. My issue with this is, how can this be controlled? My consumption of water could be three times that of my neighbour. How can this be regulated and monitored so we don’t ingest a dangerous dose? Well, I suppose the simple answer is that it can’t, can it? Fluoridated water is also absorbed through our skin, when we bathe and shower yet if one should consume more than a pea sized amount of a fluoridated toothpaste one should seek medical attention immediately, so the small print reads. Yikes!! That disclaimer alone is enough to make me squirm uncomfortably in my PJ’s at bedtime. I contacted my local TD Alan Farrell and he forthrightly (if a little gruffly) told me all of my concerns are unfounded. Phew. Thank goodness for that. He directed me to the Government document on the matter. http://www.fluoridesandhealth.ie/documents/
There. In black and white.
This and other reports sadly don’t satisfy my questions and I smell a big fat rat.

If you are familiar with the comings and goings of Irish life, political and otherwise, you too might have caught a whiff of it. Sadly, the Irish State, in it’s relatively short existence has been exposed to way too many cover ups.
Just so we are clear, this is not for me an argument that is connected to the new controversial measure of metered water in this country. That is an entirely different argument, which, from an Eco perspective has merit.
I am living back in Ireland with my young family after a 16 year sojourn in London. Paying for water is a way of life for Londoners and it is fluoride free.
My concerns lie with my family and community. Thyroid problems seem common place as does osteoporosis especially among those who are out of the traditional ‘elderly’ demographic. My own Father is recovering from Thyroid cancer and three of my friends are on medication for Thyroid problems. Ireland seems to me to have above its’ fair share of health problems. This is of course just my opinion but when the Irish Government is struggling to pay its debts and is slashing budgets in our health service (HSE) left, right and centre I can’t help wondering why they spend millions every year struggling to prevent us from developing tooth decay. If Fluoridated water is so effective at preventing tooth decay then why are our school children offered fissure sealants on their teeth free of charge?? By all accounts, these measures can’t be particularly effective as our teeth are still decaying. Personally I would rather see money being used to educate us all on nutrition, diet and feeding ourselves fresh food made by our own hands but hey, that’s another days work.
Business is picking up on this rising global concern, in the US anyway. The Wall Street journal just posted that a US water company are producing a 100% Fluoride-free water for infants o
and children. http://online.wsj.com/article/PR-CO-20140618-903995.html
So what happens now? Do we wait for a national outcry in years to come or do we ask for our Government to respect us and offer us some independent testing and reports to clear up the fact from the fiction. Now rather than later please Mr Kenny!

Should our Government be allowed to fluoridate our water without our consent?

2 thoughts on “Water Fluoridation: My struggle finding the facts amongst the fiction.”